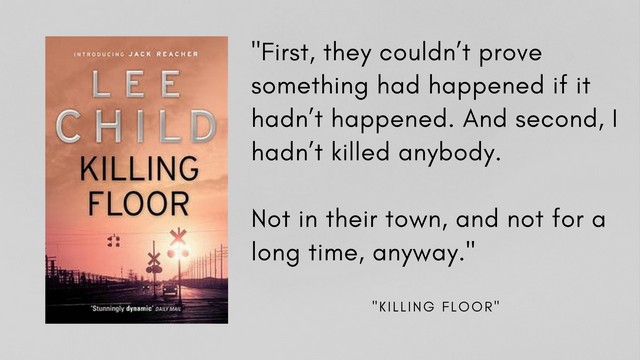 I was arrested in Eno’s diner. At twelve o’clock. I was eating eggs and drinking coffee. A late breakfast, not lunch. I was wet and tired after a long walk in heavy rain. All the way from the highway to the edge of town.

The diner was small, but bright and clean. Brand-new, built to resemble a converted railroad car. I saw the police cruisers pull into the gravel lot. They were moving fast and crunched to a stop. Doors burst open, policemen jumped out. Two from each car, weapons ready. Two revolvers, two shotguns. This was heavy stuff.

I just sat and watched them. I knew who was in the diner. A cook in back. Two waitresses. Two old men. And me. This operation was for me. I had been in town less than a half hour. The other five had probably been here all their lives.

The guy with the revolver stayed at the door. He went into a crouch and pointed the weapon two-handed. At my head. The guy with the shotgun approached close. These were fit lean boys. Neat and tidy. Textbook moves. The revolver at the door could cover the room with a degree of accuracy. The shotgun up close could splatter me all over the window. The other way around would be a mistake. The revolver could miss in a close-quarters struggle and a long-range shotgun blast from the door would kill the arresting officer and the old guy in the rear booth as well as me. So far, they were doing it right. No doubt about that.

It was a fine rendition of Miranda. He spoke clearly. He didn’t read it from a card.

I thought: should I be worried? I was under arrest. In a town where I’d never been before. Apparently for murder. But I knew two things. First, they couldn’t prove something had happened if it hadn’t happened. And second, I hadn’t killed anybody.

Not in their town, and not for a long time, anyway.